In an induction motor, for fast dynamic electromagnetic torque response, it is preferable to maintain the air-gap flux at rated value. This is achieved in V/f control, where the ratio of applied terminal voltage to that of its frequency is held a constant equal to the value at rated condition. The speed of the motor is controlled by adjusting the applied frequency while maintaining V/f constant. This experiment deals with how to design a closed loop V/f speed controller for an induction motor.

From the Sprevious experiment, the per-phase equivalent model of an induction motor is as shown below, containing both the electrical and mechanical model:

In the above steady-state per-phase equivalent circuit, the s terms have been replaced by the complex variable jω. This is justified by the fact that the electrical time constant of practical induction motors are orders of magnitude lower than that of the mechanical time constant. Thus, while designing a controller to control the motor's mechanical rotational speed, the transients associated with the electromagnetic circuit of the motor can be reasonably ignored. Hence, the per-phase steady state equivalent circuit can be assumed to be a good enough model to derive the motor's non-mechanical transfer function.

where, ωe = 2πf, f is the frequency (in Hz) of the applied terminal voltage. ωe is related to the slip as given by:

For fast dynamic response, the flux is maintained at rated value for most of the operating region of the induction motor. Maintaining it higher than the rated value will lead to core saturation, leading to increased losses and harmonics. Maintaining it lower than the rated value will lead to increased rotor losses, as well as limits the maximum continuous torque that can be generated. So, under most operating conditions, the applied terminal voltage can be expressed as function of applied frequency:

where, Vs, rated and ωe, rated are the rated per-phase terminal voltage and frequency.

The motor speed is controlled by controlling the frequency of the applied voltage. This is achieved by using a PI controller. To tune this controller for desired performance, the system transfer function needs to be established that links the applied frequency to the rotor speed, which is done in the following section.

The mechanical model of the Induction motor is given in Eqn. 5. Under steady state condition, the torque generated by the motor Tem equals the sum of load torque Tl and the torque necessary to compensate the frictional losses, Tfric. In transient condition when Tem ≠ Tl + Tfric, the motor accelerates if the former is greater than the latter, storing the excess energy as inertial energy. It decelerates if the former is less than the latter, loosing previously stored inertial energy. The motor inertia is identified as J in Eqn. 5, where ωm is the mechanical rotor speed.

The frictional component occurs due to various factors and is always against the direction of rotation. Of the many causes, only Coulomb friction which is a constant and viscous friction which varies proportionately with rotational speed are considered, since these are the ones that have significant effect on the steady-state. The torque associated with Coulomb friction is given by Tc and that of viscous friction is given by B × ωm, where B is the coefficient of viscous friction. Substituting these into Eqn. 5 yields the final mechanical model as given in Eqn. 6.

which can be expressed in transfer function form as:

From above equation, under constant load condition, a small incremental perturbation in electromagnetic torque ΔTem leads to incremental change in rotor speed Δωm:

The reflected rotor current transfer function I'r(s) in the above equation equals:

Under rated load condition, Zm is much greater than Zr, leading to the above equation being simplified to Eqn. 15. Under light load condition, Zr is much greater than Zm and Zs, leading to above equation being simplified to Eqn. 16. To keep the method for PI tuning same across the region of operation, for the sake of simplicity, Zs is added to the denominator of Eqn. 16 to make it same as Eqn. 15. This shouldn't have any noticeable effect on the operation since at the light load condition, Zs is much less than Zr. These approximations do not alter the performance significantly but reduces the order of the rotor current to applied stator voltage transfer function, leading to much simpler design.

Since Vs/ωsync is constant C in this scenario, above equation becomes:

The above system is linearized around the rated operating condition. From above equation, under operating slip slipop, a small incremental perturbation in slip, Δslip leads to inremental change in electromagnetic torque ΔTem:

The overall transfer function is shown below, including the PI controller:

Figure below shows the region of operation, i.e. the applied stator voltage as function of frequency. 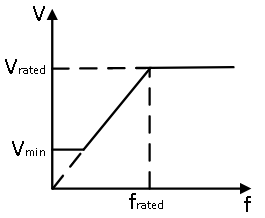 At frequencies higher than the rated, the V/f ratio can no longer be maintained due to:

Due to these limitations, at above the rated frequency, the voltage is maintained at rated while frequency is increased. This leads to reduced maximum torque due to reduced air-gap flux. This is called field weakening, where compromise is made on maximum electromagnetic torque to achieve higher speeds.

In the following section, a pre-built closed loop speed control model is run in both simulation and real-time.

It must be noted that the controller performs as expected only in and around the rated operating condition since the induction motor model was linearized in Eqn. 20 around this operating point. Also, during the derivation of the system equation, a major simplifying assumption was made, that the time constant of the mechanical system is much higher than that of the electrical system. This justified the use of the steady-state electrical per-phase equivalent motor model to derive the system transfer function. This assumption becomes increasingly invalid as the cross-over frequency/bandwidth of the speed control loop increases.

In the following section, the V/f closed loop speed control in real-time to control the induction motor speed and to observe the motor speed and current response under different load conditions and controller parameters.